Producers may wonder how cold soil temperatures can affect newly planted corn and soybean seeds. Ultimately, neither corn nor soybeans should be damaged from imbibitional chilling if soil temperatures do not dip into the low 40s within 48 hours of planting. The following (from UNL Extension) provides additional information to consider: 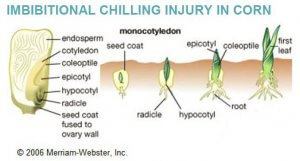 When corn seeds imbibe (take up) water, cell membranes stretch and cells expand. When a damaged cell membrane rehydrates, it may not return to its normal shape and size. This can create a “leaky” cell. Water is at its densest at about 39°F so when cold water is imbibed, it may result in additional membrane damage. These ruptured membranes may occur in the cell walls and in the mitochondria. In the plant this action may disrupt the embryo/endosperm enzymatic conversion to energy, but mostly results in leakage of cell solutes and sugars. This, in turn, is likely to reduce growth rate and interfere with growth of the emerging seedling.

Some inbred lines (seed parents) are clearly more susceptible than others, and the seed industry has been actively eliminating the most sensitive ones from use. However, if environmental conditions are extreme, many fairly tolerant parents may still show damage—imbibitional chilling is a physical phenomenon that can override biology and genetics.

COLD STRESS IN SOYBEANS
Soybean germination consists first of a very fast uptake of water (imbibitional phase) followed by a much slower uptake of water (osmotic phase). Chilling during the first phase can cause severe problems because the imbibed water is needed to rehydrate the cotyledons and embryo to the point that cell membranes become functional. Cold temperatures interfere with proper hydration of those membranes.

The imbibitional phase is typically not very long (less than 24 hours) and can occur with relatively little soil moisture since the seed is dry at planting. Thus, getting a cold rain within 24 hours after planting can lead to chilling injury in soybean and thus lower stands. A study by UNL researcher W.J. Bramlage and colleagues showed that when the soybean seed coat was removed, imbibition injury occurred within 30 minutes. With a seed coat, imbibition is slower and a longer exposure is needed before chilling injury occurs.

Bottom Line
Plant your soybeans once you are confident soil temperatures won’t be cold (less than 50°F) for at least 24 hours. If you planted two or more days before a cold rain, there should be no imbibitional injury due to cold temperature.
During the second phase of germination, the fully functional membranes (after imbibitional hydration) create an osmotic situation in which water diffuses into the living cells. Osmotic water uptake is slow with cold temperatures. Chilling during this phase causes little direct injury to the germinating seedling. However, cold temperatures will slow emergence.

PRACTICES TO MAXIMIZE GRAIN YIELD
Uniform germination and emergence of corn is essential for maximum grain yield at the end of the season. In many ways, plant stand can be optimized by following these three guidelines:

1. Adequate Soil Moisture – Corn kernels must absorb approximately 30% of their weight in water before germination begins. Less than optimum absorption of water can slow or stop germination. Uneven soil moisture in the seed zone can be caused by a number of factors, but the number one culprit is uneven seeding depth.
2. Adequate Soil Temperature – For corn to emerge quickly, soil temperatures at seed depth must be consistently 50°F or greater. When excessively cold soils delay germination and emergence, the kernel and young seedling are vulnerable to disease, insect feeding and potential herbicide injury.
3. Adequate Seed-to-Soil Contact – In order to maintain adequate moisture around the seed, soil must be firmed around the seed. Open planter furrows, trash in the seed furrow, or cloddy seedbeds can cause problems.

Evaluating the Likelihood of Success
How do we tell if we have mastered these three factors in the planting operation? A good indicator is to measure plant populations at emergence and also evaluate uniformity of emergence and plant spacing.

Uniformity of Emergence – Research at several universities demonstrated that uniformity of emergence is more critical than uniformity of plant spacing. When counting plants observe and record the number of plants that are 1 or more collars behind the average. Dig plants to find if the delayed emergence is due to planting depth (a good clue on planter speed or seedbed conditions). If 1 in 4 plants emerge 7 to 10 days late (1 to 2 collars), estimates on loss of yield potential range from 4 to 7 percent.
Plant Spacing – A statistic called standard deviation is a good way to measure consistency of plant spacing. In simple terms, standard deviation is a measure of the distance, in inches, of a majority of plants (2/3) from the mean of the population. For example, if the standard deviation in a population count is 2”, it means that 2/3 of the plants were within 2” of the average plant spacing.

Potential Planter Problems
What are some of the most consistent causes of poor standard deviation? Planter problems were common. There is as much variability within planter makes as between planter models. The good news was that properly maintained planters show consistently better results (standard deviation < 3”). Some older planters with worn disc openers and seed singulation parts commonly result in standard deviations > 4”.

Residue is a problem. With modern farming we have increased header sizes on combines. With a 25 or 30 foot soybean head, the grower may encounter a considerable amount of swathing of the residue, even with chaff spreaders. This creates 2 problems. First, rows with heavier residue emerge slower due to cooler soil temperatures. Second, the residue often results in poorer seed-to-soil contact. Watch changes in seed size. Vacuum planters need to be adjusted when changing seed sizes. Many times only scouting and farmer observations can discover that this job is not getting done after the planter is full.

Other Valuable Information
Dig to find the reason for the skips – Valuable information for making future management decisions can be obtained by diagnosing the reason for skips in the stand. If the problem is due to mechanical, insect or disease problems, poor seed bed preparation, fertilizer or herbicide damage, gaining information can allow the retail seller to suggest adjustments that bring substantial value to the producer.

So what? Anyone can measure off 1/1000 of an acre and count. However, measuring plant spacing, observing uniformity of emergence, and diagnosing the reason for stand loss adds significant value. Careful use of the data can help producers evaluate their planting operation. Are gaps in the stand due to no seed dropped, variable planting depth, poor seed-to-soil contact, or insect and disease problems? The bottom line is helping the grower optimize plant stand will increase his/her profitability and will lead to success in earning future business.

ASSESSING STAND QUALITY
A worksheet is provided to assess stand quality. To conduct an initial evaluation, stop at 4 locations in each field and conduct the following procedure:
1. Place a flag where the assessment will begin.
2. Beginning at the flag, measure the distance between 30 consecutive plants. Round the spacing off to the nearest inch and record your data on the worksheet.
3. Looking at your worksheet count the number of gaps that are 12” or more. Dig in these gaps to observe the reason for the gap (no seed, injury, disease, poor seed soil contact).
4. Next observe the average number of collars for the 30 plants and count the number of plants that are 1 or more collars behind in development.
5. Dig several plants and observe and record planting depth. 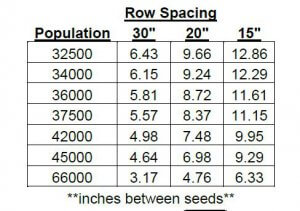